This being the morning before zero hour…I thought that this might well be a good time to write about the Great Storm of 1824 that hit the country. Those living on the South coast were worst hit.

This is a tale of a storm that was so severe and so destructive that it has gone down in Weymouth’s legend. My father used to recount the tale, it had been handed down through the family, as I’m sure it had been through many others. You mention the year 1824 to any old Weymouthian, and they’ll shake their head as they recall tales told of the devastation to the town and nearby.

Well, here we are again, and if the amount of media hype around he forthcoming ‘Storm’ is anything to go by, this could be another biggun that’ll go down in the history books! But the again it might just be a bit blowly…none of the weather forecasters are willing to become another Michael Fish of the infamous ‘no hurricane’ of 1897, when everybody woke next morning to scenes of devastation.

1824, 22nd November; The weather had been fairly boisterous along the south coast, but that wasn’t unusual for this time of year, those that live along the coast were used to raging seas and shipwrecks, but what was to visit them that night and the next day was something out of Dante’s Hell!

People had gone to bed that night, listening to the wind howling like a banshee outside, most thinking how lucky they were to be tucked up safe indoors, and said a prayer for those out at sea.

Things were about to get worse…a lot, lot worse!

During that fateful night those ‘winds’ had turned into a full on hurricane by 4 o’clock in the morning, the already raging seas boiled, accompanied by a huge tidal surge. 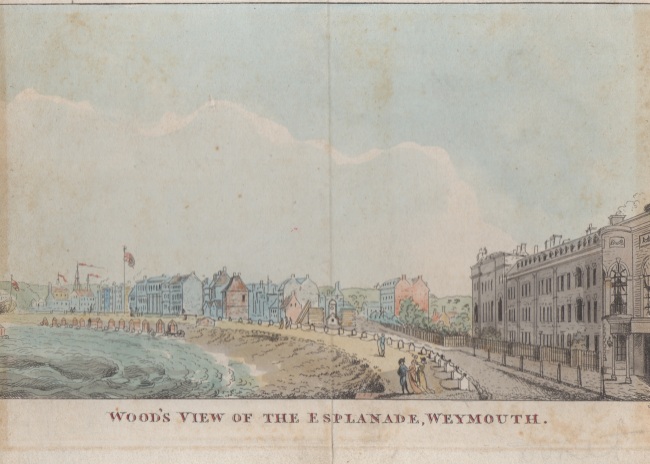 In Weymouth, the normally tranquil bay was a mass of crashing waves, foam, shingle and sand, the force of which ripped out completely the renown esplanade that Royal footsteps had once paraded along. The famous white stones and chains that marked the promenade along the shore were dragged from their very spots by the scoring waters…(a few of the originals remain outside the old Pier bandstand.)

The grand houses along the seafront were deluged with seawater, the lower floors awash with the debris from the pounding and relentless waves, vicious spray pelting their grand Georgian windows with pebbles and sand.

This is where the famous Narrows once were…where the sea sat right opposite the Backwater, only a thin spit of land stood between the pair…on that dreadful day day, the two finally met! Two people lost their lives while trying to cross the surging waters

Down by the harbour, even worse devastation!

The pier was virtually demolished, ships that had once floated against  the harbour walls now sailed up through the flooded streets. Many more were smashed to pieces in what should have been the haven of the harbour, some were just washed out into the bay and sunk without trace. All the houses and buildings around the harbour were inundated with the surging seas, flooding cellars and lower rooms. Peoples precious belongings washed too and fro as they frantically tried to save what they could from the cold brine.

On the other side of town, Lodmoor, fared no better. The main road into Weymouth from that direction was also protected by a raised pebble beach, that was all that stood between the  relentless crashing waves and Lodmoor behind. Once the waters began to rise, the fractious seas topped the bank, and the flat lands of Lodmoor became part of the bay, waves rolling in across the grass where once brave Yeomen had raced their horses.

The Cove at Portland was to see one of its worst ever disasters. The mountainous seas out in West Bay crashed relentlessly onto the pebbled shore, reaching ever highrer and higher…until one mountainous wave rose up like a mighty warrior and with one vengeful swoop crashed down onto the houses below.  ‘The lower part of the parish of Chisel on Portland was in a moment deluged by a most tremedous wave that swallowed up the greater part of it, and upwards of 30 souls were in an instant doomed to death.’ When they set to recovering those bodies from the rubble , those that hadn’t been washed out into the sea, amongst the debris and pebbles they found a husband and his wife with the battrered remains of their seven children. 30 odd houses had been destroyed and many more so severely damaged as to make them almost uninhabitable.

After the devastating event a meeting was held, all the local Portland fishermen had lost their boats and nets, everything, absolutely everything that they owned washed away into the depths of Davy Jones’s locker! Most had no homes left, no clothes, food…they were in a dire strait.

The crossing at Ferry bridge had been smashed to smithereens…now there was no way for help to come from Weymouth. In the storm, the people from the house next to the crossing managed to escape with their lives, bar one. He had risked his life trying to rescue a soldiers horse from the stables by the crossing, he succeeded, the horse survived…but he drowned.

The most destruction befell the small village of Fleet that huddled behind the Chesil bank. The raging seas washed right over the top of the huge pebble bank and rushed towards the village like a steam train. An eye witness account of that describes what they saw;_

“Twern’t a sea – not a bit of it –
twer the great sea hisself rose up level like
and come on right over the ridge and all,
like nothing in this world”;

The little village church was almost completely destroyed, the houses flattened by the power of the surging water, the only saving grace was the villagers had fled to the high ground of Chickerell when they saw what disaster about to befall them.

Further along the coast, at Abbotsbury, the famous Swannery was deluged with water, many of the resident birds perishing in the onslaught of the fierce storm.

Inland, a huge barley rick had been lifted into the sky like a balloon in a breeze, only to land a 1/4 mile away..in one piece!

Numerous ships were to come to grief along the South coast in that wild melee, for the few days after the storms, body after body was washed up all along Chesil beach, nearly 100 in total, they were all gathered up and given a christian burial at the nearest graveyards to their discovery. Most unidentified. 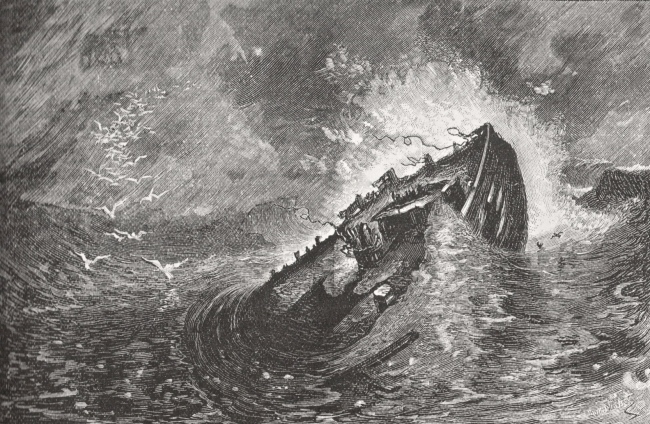 Stories of bravery were told of desperate attempts by those on shore to rescue the poor souls on board stricken ships that floundered near the coast, men time and time again in their small boats, battling against the rolling waves that towered over them, no thought to their own lives.

One can only imagine the terror that must have struck the hearts of those on board these floundering ships as they saw the destructive, towering waves as they pounded onto Chesil, they knew they were doomed, all they could do was pray, and hope that their God would be kind and make it quick.

A passenger aboard the fated vessel, the Colville, could only think of one thing during his last moments on earth. He didn’t want his battered body washed up and buried without anyone knowing who he was. He tore off part of his shirt, wrote his name and address on the already soaking fabric, and tied it tightly around his neck, safe in the knowledge that his wife back in London would know his sad fate. He was ready to met his maker!

So, here we sit today…waiting to see what nature will throw at us tonight and tomorrow.

May God save us all.

http://www.dorsetlife.co.uk/2013/01/the-great-gale-of-1824/ (story of the storm and shipwrecks on that day including a drawing of Chesil cove in the midst of the destruction)

http://www.southampton.ac.uk/~imw/chesil.htm (site of Chesil including photos taken during storms)

http://www.southampton.ac.uk/~imw/Fleet-Lagoon.htm (includes descriptions, narrations and modern day photos of the aftermath at Fleet, scroll down the page)