Anyone living in the Weymouth  area while Portland was still a main stream prison  will have memories of the horrendous traffic jams along Chesil Beach Road, caused by the pursuit of escaped prisoners. All vehicles leaving the island would be stopped and searched, checking for concealment of said escapees.

As a young child it caused no end of great excitement. My parents even tried using it as a subtle threat, (well, o.k., maybe not so subtle,) to  make me better behaved, whispering as we crept ever nearer to the stern looking officers to sit still and keep quiet. Of course, that only added to the frisson of excitement.

Portland’s grim looking prison was originally constructed in the late 1840’s to house convicts brought to the island specifically to work on the new coastal defence scheme, included the building of the breakwaters, Verne citadel and surrounding batteries. Prisoners were used as manpower in the quarries, painstakingly hewing its famous white stone free for their construction.

This was ‘hard labour,’  at its truest meaning.

Nowadays that Victorian prison building has become the YOI, (Young Offenders Institute,) but in its time it held many a hardened and persistent criminal, political activists such as the ‘dreaded’ Fenians, and the usual mottly crew, many of whom had turned to crime out of financial necessity.

Throughout the years of the prison’s history, there were many attempts at escapes, some succeeded, many didn’t.

Come 1899 though and a story hit the national newspapers, capturing the imagination of their readers. William Bartlett, one of those ‘persistent’ petty criminals, was making his way out from Bow Street police-court. Rather surprisingly, he had been taking the Police Commissioner to court for the return of a few disputed items, maintaining they were his legally, but the courts felt otherwise, being more likely ill gotten gains of a recent robbery. This being considered a news worthy article the press showed an interest, William was stopped outside by a reporter asking for his version of events. William though had an even stranger tale to tell, proceeding to enlighten the eager scribe of his past history, a ‘romantic’ tale about his daring escape from the dreaded Portland prison, boasting he had been the only man to escape. its grey forbidding walls. (Not true in fact because quite a few tried before him. Some even tasted freedom for a few months before being recaptured.) 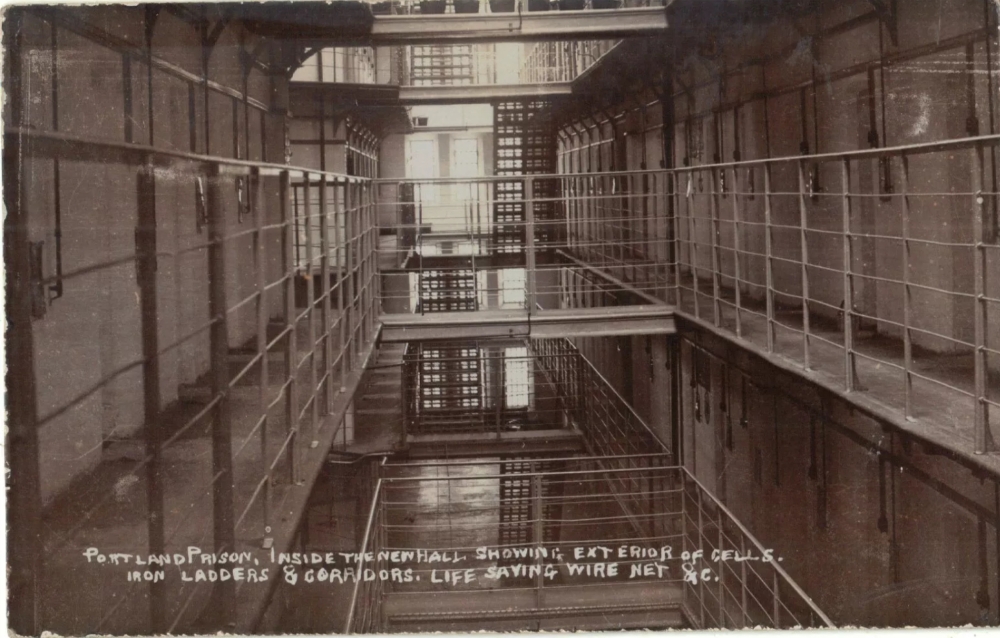 William also claimed that his daring escape made him the hero in Hawley Smart’s novel, ‘Broken Bonds’ published in 1874, bragging

The correct details of my escape have never been told.

The eager reporter was avidly devouring his every word. This wily old career criminal continued his story.

In 1868 I received a sentence of 10 years’ penal servitude. From Pentonville I was taken to Portland.

It was awful! The endless round of hard work in the quarries, the short commons, and the strict discipline, made life almost unbearable. It is to be wondered at that I made up my mind to escape!

I had many a sleepless night while I was laying my plans. I knew that no one had ever succeeded in escaping from prison; I knew that the place was watched night and day by guards almost as numerous as the convicts, and I was  aware that even if I could get clear of the prison it would be almost impossible to get far away in a suit plastered with the broad arrow.

But things were about to look up for this chap in his rough prison garb.

One day I managed to pick up a small piece of hoop iron. That seemed like a godsend. Every time I had the chance I took that iron hooping with me, and worked like a nigger to make it into a saw. I did it in fear and trembling, for the slightest sound would have betrayed me. A stroke of luck awaited me. I found a convict who had got a bit of a file. He had no ambition, and said the file was no good to him. I gave him my dinner for it, and with the file I was able to complete the saw. Then I managed, by working stealthily every evening after I had been locked up for the night to saw through the wood flooring of my cell. Every night I had to replace the boards, so that the warders should not see what I had done.”

Far from plain sailing though, when constructed, the designers had considered the possibility of such dastardly deeds, they had added a means to prevent escape through the floor.

…an awful disappointment awaited me. The space beneath my cell was lined with sheet iron; but, nothing daunted, I eventually got through that. Then I got into an air shaft, and, after three months’ hard work, saw my way clear to liberty.

Biding his time, it had taken months to get this far, no point in rushing his plans and risking capture. 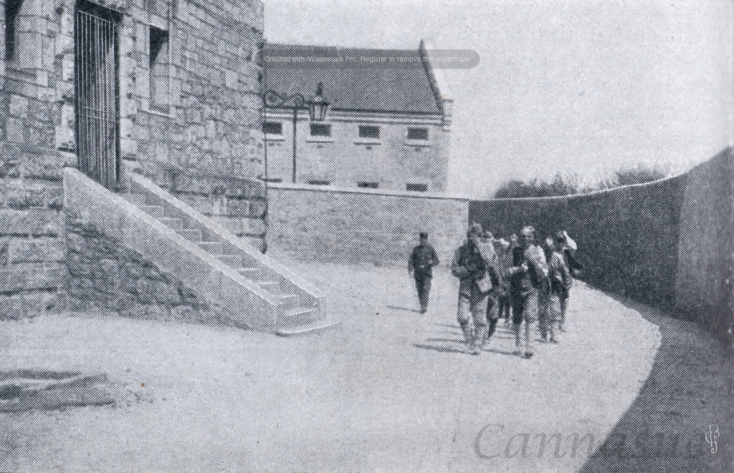 At last the opportunity came. It was a dark night and all was still. With my sheets I had made a rope, and, as luck would have it, I had picked up a piece of wood, called a ‘dog’ with iron hooks at each end. I put my stool underneath the quilt, to look as much like my body as possible, in case the warders should look in, and then went down the passage it had taken me three months’ hard labour to make. After lifting an iron grating I found myself in the open air, and managed to throw the hooks on my linen ladder over a wall. By this means I got onto the roof of the officers’ quarters. There was no one about, and the only sound I could hear was that made by me beating heart. From the roof I had to jump on the boundary wall, about 10ft or 12ft distant.  I dare say it was a bold leap, but you don’t stick at trifles when you are escaping from Portland.  I made the leap, and was successful in reaching the boundary wall. Then I got to the ground by means of my linen ladder. Unfortunately, the hooks were so secure that I had to leave the ladder where it was, and if it had not been for that I might have been in London in three or four days.

Things weren’t going too well though for fleeing William.

As it was I had an awful experience.  Whilst making a desperate tug at the ladder I heard footsteps approaching, and I rushed into the garden of the Grove public-house.

I turned round and saw a guard looking at the ladder. A few minutes afterwards shots were fired and a bell rung. My escape had been discovered.  Guards were running in all directions; but, unperceived, I got through the window of the Roman Catholic Chapel, and concealed myself beneath the Communion table, which proved to be something very much like a box.

I could hear the sound of hurrying footsteps all night, but no one came into the chapel until next morning, when service was held there. It was not a pleasant position to be in, I can assure you.

A sneeze or a cough would have betrayed me, but, fortunately, all went well. But I got very hungry. So, at the end of about 33 hours, I stole out, and broke into the Clifton Hotel. I there found some bread and meat, cheese and tobacco. What was of more consequence, I was able to steal a hat and some clothes. With the clothing and food-the sweetest food I ever tasted-I returned to my hiding place in the chapel.

Now ensconced within the relative sanctuary of the chapel’s walls, he set to with the next part of his scheme.

Out of a black coat I made a pair of trousers, and put on another of the stolen coats, which happened to be made of velvet. The food I divided into six portions, and for six days I was concealed beneath that Communion table. There were frequent services, and, what was still worse, the priest used to come in at night for private devotions.

William realised he couldn’t stay hidden in the chapel for ever, having merely swapped one form of imprisonment for another! He had to make his move.

At last I had more than enough of it, and broke into the priests house with the object of obtaining some money. I could find none, however, there was some silver plate, but that was of no use to me. I obtained a white stole, however, and with that made me something resembling a white shirt.

It was now or never, he had to make his way across the Chesil causeway, or he’d never leave this god forsaken island.

Feeling now fairly confident as to my appearance, I walked down the road, and saw a milkman, who, I afterwards found, gave information about me. I passed over the bridge all right, and went on to Weymouth, and from there to Dorchester. 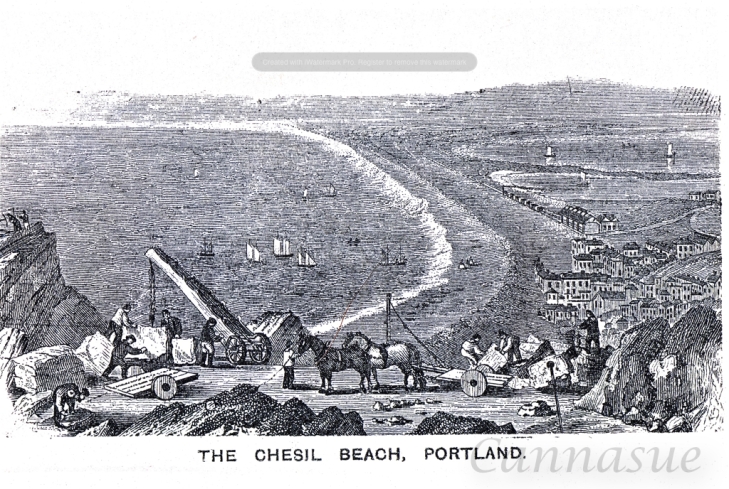 At a little place 19 miles from Portland I concealed myself in a field. Two men came in blackberrying, and I had to get out. They asked me where I was going. I said to Blandford.”

Not all was that it at first seemed, a trap had been set.

They volunteered to show me the way, but we had not gone very far before we met two police-inspectors. They asked me to go into a public-house and give an account of myself. They were particularly anxious to know if I had a mark on my right arm. Seeing the game was almost up, I tried to dash through the public house, but it was no good, and I was collared. Having been recaptured and brought before the courts yet again, the errant prisoner awaited his fate.

I was afterwards sentenced to eight years penal servitude for the burglary at the Clifton Hotel.

No, I did not have the cat. You see, I was tried by a civil power.

And the little man chuckled.

Though William was thoroughly relishing his moment of fame, the reporter ended his piece with a poignant sentence.

Immediately afterwards he assumed a graver tone, and asked, in mournful accents, ‘But what can an old convict like me do for a living?

Excerpts from the Western Gazette 1st Sep 1899 and various other national papers of the period.

Enjoy a bit of local gossip?

Don’t think this is just a book about the military in Weymouth …which of course it is…but it contains so much more.

Stories of Weymouth and Portland families, tales of harsh conditions for convicts and local quarrymen in the Portland dust bowls.

The doings of local bobbies in their fight to keep soldiers and residents on the straight and narrow.

Who knows, you might even find one of your relative’s tales within its pages.

You can find it stocked in Weymouth Museum and Nothe Fort book shops.

Please shop locally if possible to support our town.

Failing that it is available on Amazon