I was debating what to do my next blog on when I became sidetracked by a lively discussion going on in a Facebook group that i belong to.

The first discussion, that was becoming a little heated concerned three new sculptures by artist Andy Kirby that had recently been unveiled in Weymouth.

Some loved them, some hated them…I personally think they are great fun.

The only downside I think is that they are based in and around the New Look site, Mercy Road, (well…I suppose that New Look  and the new Sainsburys’ did commission them,) but this means that they are  not available to the majority of people to view unless they specifically head for the out of town Park and Ride.

The sculptures had a lot of thought put into them, and they reflect (quite literally in one particular piece) snippets of Weymouth’s past history, some well known such as the torpedo works at Wyke, George III, the Jurassic Coast. They were designed by the artist using what is carefully referred to as ‘the power of public art,’ with the local community having a great deal of input into the project, the artist having collected local folk tales and snippets of family history from those involved in the project. 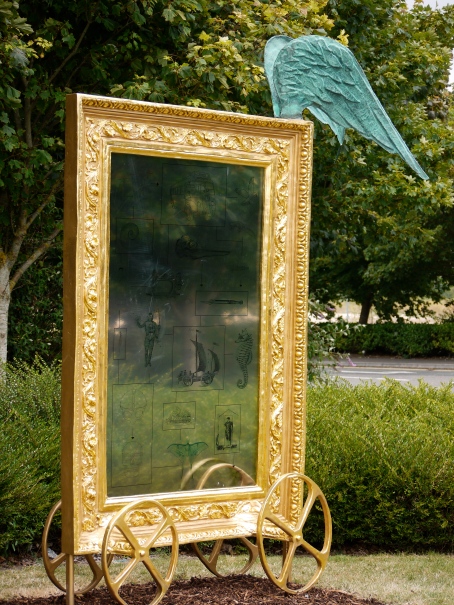 A timeline of his work for these installations can be found here.

I love this funky bus stop right outside Sainsbury’s.

The second discussion covered the new buildings going up along the inner harbour side, where the old fire station had once stood.

Many thought that the plans were sympathetic with what had once stood there, (this side of the harbour being the original old Weymouth town as opposed to Melcombe Regis on the other side of the waters,) it an eclectic mix of many historic buildings some dating back to the tudor period, (but which were tragically demolished in the 20th c the name of progress.)

Others decried these pseudo styled dwellings, and say that the council should have been brave, bitten the bullet  and gone for something more modern and brought the resort bang up to date.

Who’s to even say who’s right?

But what has all this got to do with Victorian Weymouth and Portland?

Well…I guess that right down through time there has always been conflict and disagreements on what is considered art, good taste, fashionable style, in both pieces of artwork, building designs and town planning.

No matter which era you pick in Weymouth’s history, you bet your bottom dollar that someone came up with a grand scheme to improve the area, and before you could say ‘Jack Robinson,’ someone else shot it down in flames.

Design and aesthetics is a very subjective matter…no one is right, and no one is wrong. Thankfully, in our country, we all have the right to our own opinions, and a right to voice those opinions..well, so did our ancestors of the Victorian era.

One example of this was the construction of Weymouth’s present day jewel in the crown, the Greenhill gardens in the late 1870’s.

Visitors to our town who knew the Greenhill a year ago would now be at a loss to recognize the old spot, so thoroughly has it been altered. Instead of its being as heretofore a place of humps and hollows and desolation, it is now, through the great generosity of Sir Frederick Johnstone, one of the prettiest places in the town, and is really a people’s park in miniature. The ground has been very admirably laid out under the direction of Mr. G.R. Crickmay, and now there are grassy slopes, artistic mounds, and pleasant walks. The gardens have been planted with trees, shrubs, and plants of various kinds, and when these have had a few years growth the appearance of the place will be considerably improved. At the extreme end of the gardens is a well-formed piece of ground to be used for croquet playing. This site is surrounded by a rustic wooden fence, which gives it a very pretty appearance. Another important advantage is that owing to the construction of the gardens the Esplanade has been lengthened to the extent of several hundred yards. The gardens may now be considered nearly completed, only some fine gravel being required to finish off the walks. When the gardens are thrown open to the public, we are sure they will be greatly appreciated by the town, and the Greenhill will be a pleasure resort both to residents and visitors.’

Not everyone was happy about it’s construction, certain locals believed that ground to be Melcombe Common, and rebelled against anything being placed there that impeded the publics right of way, even going as far as to getting a mob of 150 odd people who broke down the fences of the gardens.

Come 1886 and the case of trespass ended up in court, going rather badly for those who had , perhaps, misguidedly it seems, stood up for rights of the common man.

Despite their rocky start, these gardens are now a well established and truly cherished part and parcel of Weymouth.

Rather ironically, there is also a fierce battle going on at present because the local council want to sell of this precious and much loved open space which had been gifted to the residents of the town to private developers to manage. Many fear that this would ultimately end up with this prime sea frontage piece of land being used for luxury development.

Even the trusty old Kings Statue hasn’t been without its detractors over the years.

Who nowadays could even begin to imagine Weymouth without that imposing and regal landmark?

First unveiled to the public on the 25th October 1810 in honour of the King George III who had literally put Weymouth on the social map when he made it famous as a watering place.

A certain amount of skullduggery, lots of shenanigans and political manoeuvring had taken place over this mammoth piece of sculpture during the period of its conception (1802,) and its rather large foundation stone  finally being put in place,(1809.)

Ever since that unveiling date of 1810 it has attracted numerous controversial suggestions as to it’s construction, position on the esplanade, coat of colours….. not everybody appreciated it, some wanted it removed altogether, claiming it was an ugly blot on the fine esplanade, later came claims that it impeded the free movement of traffic!

The area in front of the statue had eventually become THE meeting place for any social, political or town ceremonies.

In later years it was reduced to little more than a mere traffic island in a very busy road, a place where buses arrived and departed at regular intervals, with the destination Kings Statue emblazened on their front.

Nowadays, thankfully it still sits resplendent in its bright colours and gildings amongst the busy traffic…but at least those who had cared enough about it had stood fast and not let the detractors who wanted to modernise the town confine it to some out of the way spot or even worse, the spoil heap.

The most iconic symbol of Weymouth I suppose has to be its beautiful and elegant Georgian seafront, there is nothing like it anywhere else…it just oozes charm and history, elegance and style.

Yet, come the end of the Victorian era, and some councillors were calling for it all to be pulled down and replaced with something more modern, something that would speak to the modern day tourists.

To them the Georgian facades were old fashioned and outdated.

What if they had got their way?

Writing a book, blog, short stories or your own family history, then why not bring them to life with historical graphics.

I have a huge collection that cover illustrations from Victorian articles about travel, prisons, children’s homes, poverty, philanthropy…

Check out my Etsy site for Victorian illustrations, many local ones being added all the time from my own personal collection.

The book blog of Jordan Reynolds