Storms are nothing new to us on the South coast, we have lived with them since time immemorial, though this winter’s battering is proving to be some what of a prolonged event!

World famous Chesil beach  runs from the cove at Chiswell, Portland to West Bay. Facing that immense heritage pebble bank is the locally named Dead Man’s Bay, or Lyme Bay, an aptly named piece of water due to the amount of ship wrecks  that have ended up along this stretch of coastline during the storms over the past centuries.

Many of those vessels that came to grief in the bay often contained valuable cargoes, and from time to time tantalising bits and pieces would be washed ashore during storms.

Portlanders were frequently found scouring the shores of Chesil, even while the monstrous waves pounded the pebbled shores , they knew this was the time when Neptune spewed forth dead mans riches, an opportunity to drastically change their lives as long as they managed to survive the towering waves. The winter of 1876 had seen tremendous storms, and part of Chesil beach had been washed away revealing seams of blue clay. The scavengers had been busy, and had struck lucky. One eagle eyed Portlander had come across a bar of dirty looking metal wedged in the mud…picking it up, he examined it, he knew that it might be something valuable. It turned out to be a bar of solid silver, weighing in at 3lb 2oz and worth £12.00 (in old money) Certainly a lot more than he could ever hope to earn toiling in the quarries for a few weeks. Apparently these bars were supposed to have come from a couple of the Spanish Armada treasure galleons that had gone down out in the bay. The Portlanders even had a name for these frequently found and  much treasured ingots, they were know locally as “duckey-stones.” 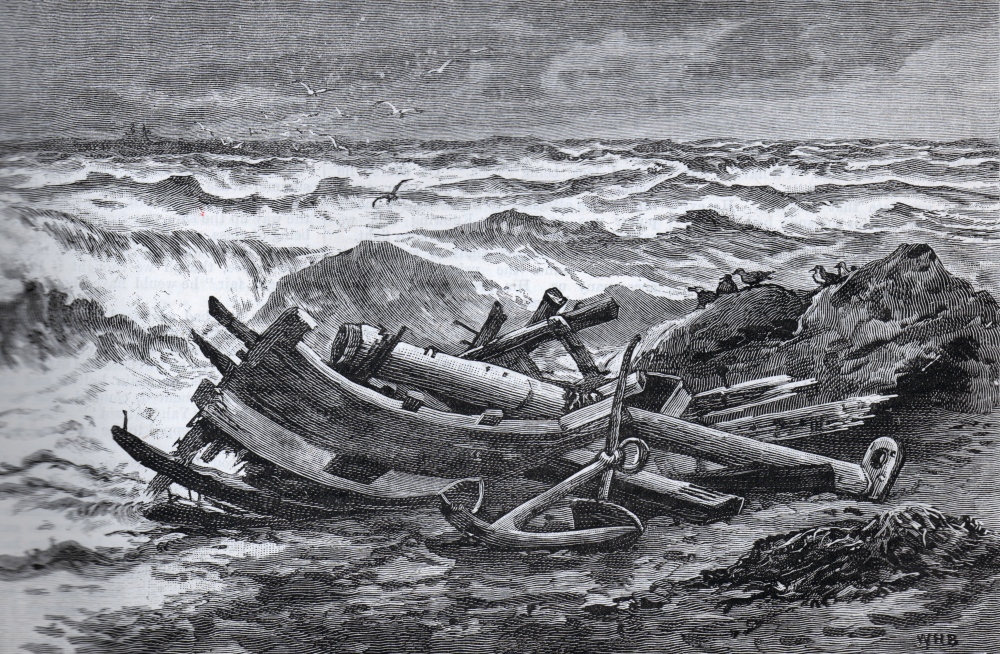 I wonder what those old Portlanders would have made of such things nowadays, with all the media hype about the severe weather and the question of Health and Safety, warning to stay right away from the coast when storms were forecast.

Mind you, even nowadays some people like to dice with death and walk a fine line with the boiling shores. While sat watching the raging seas at Chesil from the safety of the pebbled groynes I watched a camera man who was obviously determined to get an unforgettable shot of the waves crashing on the shore. He boldly strode  down the beach, equipment in hand, finally stopping right at the waters edge. 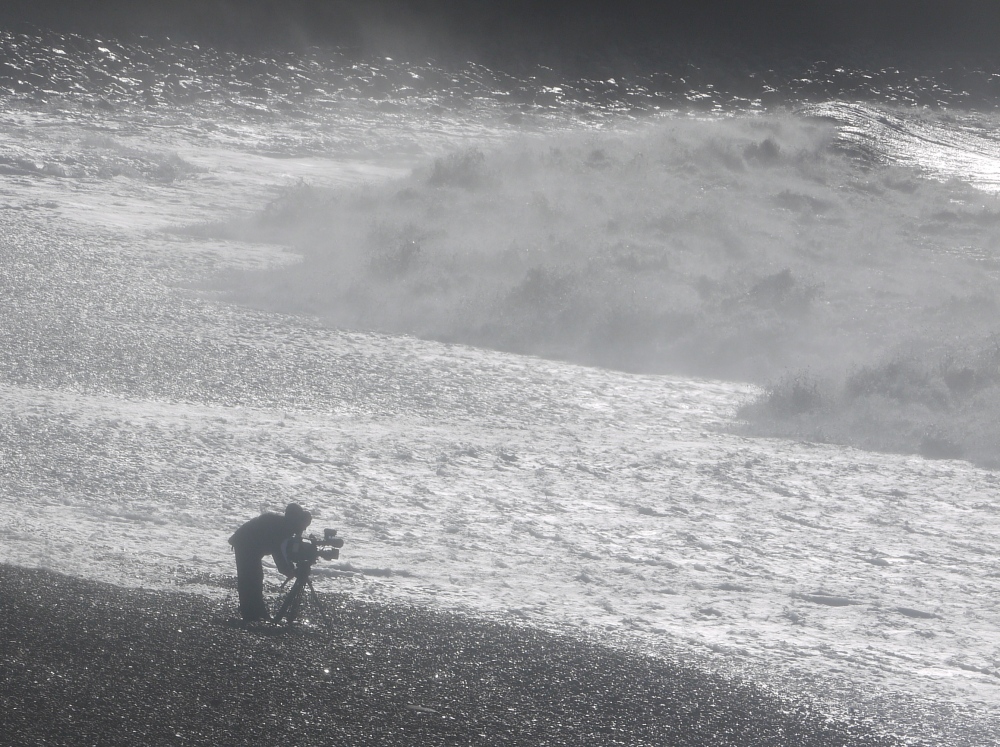 Maybe he should have been more careful and kept a closer eye on what was going on around him as he packed away his expensive equipment….

He was certainly one very lucky cameraman…he very well could have been another sad statistic.

Oddly enough, just days after I had written this blog, the South coast was struck again by another fierce storm, in the terms of wind strengths, this was the worst of the Winter’s conveyor belt offerings. We went for a wander over next morning to survey the damage, and I couldn’t believe my eyes when I looked over the railings onto the beach below…the pebbles had vanished!

Virtually every single one of them had been scoured back into the sea!

You can see the depth of pebbles that were removed that night by the depth of the ironwork left exposed beneath the steps.

Revealed was the blue layer of clay that I had written about (and had wondered about at the time of writing, thinking perhaps that had been an exaggeration… obviously not!)

Even the massive Chesil Bank itself was revealed to be made of the blue clay, great swathes of it exposed right up to the ridge line. While we were there the Environment agency staff were there surveying the damage, probably wondering how the army who had been drafted in to move the pebbles back into place were going to work their miracles now…what pebbles?

I had always assumed that the Chesil Bank was composed of pebbles, and nothing but pebbles…but now I know different! Don’t worry though, the Portlanders will tell you that what the sea took…the sea will replace, eventually! Might take a while!